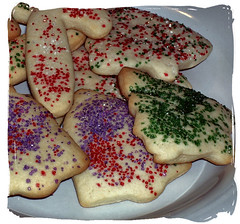 I know Christmas is over, but I thought I'd post this recipe anyway. Since my body is forcing my baking to become gluten free, I probably will never make this particular cookie recipe again. I've eaten these cookies every Christmas of my entire life, so the whole situation is really quite sad. My mother has told me, on numerous occasions that I was, under no circumstances, to give this recipe to anyone. I don't know why she's so protective of the recipe. Just because it is the best butter cookie recipe ever doesn't give her the right to withhold it from the general population. What I'm trying to say is please don't tell my mother about this recipe blog because she will kill me when she finds out! Besides, I'm pissed at her at the moment, so screw her, and have the recipe!

It is a very versatile recipe. You can make the cookies in any shape you want, so they're perfect for any and all occasions! Valentines, Easter, Christmas in July, birthdays etc. Anytime is cookie time!

Dear livejournalists who read this journal:

You are humbly requested to send me your favourite healthy, good for you recipe. I'm just dying for new recipes to try, that are healthy.

In other news, I've done NOTHING today. Well, I updated my recipe blog some more. That's okay, its Christmas. Oh, I guess I sent off some resumes and cleaned the kitchen. Man, I did do things today. That's just wrong.
______________

Spend the day baking cookies. Good thing I'm giving them away, because I don't think I could eat these cookies myself.

Well, i could. I really shouldn't. I'd have to buy new pants. Bigger pants. That is not a good idea.

Saw the new National Treasures movie tonight. Not bad. Not an award winner, but it was entertaining. Although I should point out that you can't actually build a city of pure gold. Gold is too soft to build buildings.

Now Brett is home for 12 days straight. *sigh* the house is going to be a disaster.

Oh well. That's all for now. I know its a boring update, but there isn't much to say right now!

One of the people on my f-list wanted to know more about everybody on their f-list. My profile is pretty explicit in the normal 'who am I?' way, so here I will make a list of 50 things about myself that aren't mentioned in my profile. This technically isn't a meme.

I have made my sex muffins (super brownies) and now I don't know what to put on them! Please help!

Open to: All, detailed results viewable to: All. Participants: 24

With what should I cover/ice my brownies?

Thanks for your input! I planted the miniature Clematis pictured at left in a pot this past Spring. Because its in a pot, the roots don't have great protection from a really hard freeze -- if the soil in the pot became completely frozen, the plant would die from the drought. So, a couple weekends ago I finally remembered to bring the pot inside.

I meant to put it in the basement to keep it cool enough to remain dormant, but keep it frozen. Instead I forgot/was lazy and left the pot near the patio door in the kitchen. Guess who's clematis thinks its Spring? Damn! I am so stupid! I'm going to have to let it grow, flower and then keep it healthy until I can put it outside in May. Hopefully it won't be pissed off that I screwed up its freeze/thaw cycles. I'm a little worried. I don't have any fertilizer to give it because I used it all in the fall! I'm going to have to buy some fish emulsion soon.  Oh well, I'll have a lovely purple clematis in my kitchen in January/February. MWAH HA HA! Flowers in the winter! Are you not all jealous?

The Christmas baking is going well. So far I've made my sex muffins (which are actually just the best brownies in the entire world). They are cooling now so I can't sample one. Phoo!

SO MUCH SNOW! And its still coming. Expecting 30cm of snow total. Its horrible! We've shoveled outside first thing this morning and now we have to do it again. PHOO!

And I'm bored, stuck inside (sitting on the couch with my feet propped up and a Shinobi sitting on my calves) so a meme!

I'm so upset! My cat Neko decided to hide on me this morning. He didn't come for breakfast, he didn't come for treats (its 10am and he hasn't eaten!). I searched the house from top to bottom, I even went outside shaking a bag of treats (which I was forced to give to two black cats and a tabby who came running when they heard the bag shaking.). I was getting so worried.  Neko is an indoor cat! And its cold outside. I started fearing severe frost bite.

Then I found the little arse. He was on my grow stand! BEHIND AND BETWEEN POTS OF FLOWERS! How the hell did he get there? He had to climb over empty Clementine boxes and poinsettias to get to the spot he's sitting!  He just lays there glaring evilly at me for disturbing his slumber. LITTLE ARSE!

Now I'm worried that he's sick. If he doesn't eat in a few hours I'm taking him to the vet. That'll show him!
Collapse