I just finished my MSc. in plant biology at the University of Waterloo (Ontario, Canada). I studied plant cold-tolerance with specific emphasis on understanding plant anti-freeze proteins.

Currently trying to figure out what I want to do with my life. I'm unemployed. I actually like it... after 7 years of school its nice to have a break! I am searching for jobs, but it is slow going. Its actually getting frustrating because I'm sending out resumes and nothing is happening! I am starting to run out of money. Luckily my partner makes money so we won't go into debt, but still. Sometimes its nice to be able to afford to buy new socks.

I have decided that my goal in life is to win the lottery, buy a house, and garden for the rest of my life! Oh, and kill all spiders that want to inhabit my coffee pots and tea kettles. The damn things keep trying to kill themselves with caffeine ! I have to admit, that isn't a horrible way to die.

Although I would LOVE to open my own bakery.I would have special sugar free, organic and gluten free sections (as well as normal baking). Anyway, Gardening and baking. I could do those two things for the rest of my life!

I grew up in Brampton, ON, Canada. I am currently living in Kitchener with my wonderful partner Brett, my FIVE cats Mila, Miles, Neko and Shazaam, and Shinobi. I don't have many photos of Brett (he doesn't like seeing what he looks like after a photo) so I won't post any! I do, however, have many photos of my cats (see below).

My cats were all adopted or saved from homes where they were unhappy.

Our oldest Neko, is almost 7 years old and is a big white fluffy ninja. Before he was with my partner he was in a house where the older cats beat him up. He was rescued from the other cats -- not the owner. The owner treated him very well and was very sad to see him go, but she just couldn't let him get hurt by the older cats (whom she also loved). Nobody beats Neko up now --- he is the king of the house. You don't mess with Neko. 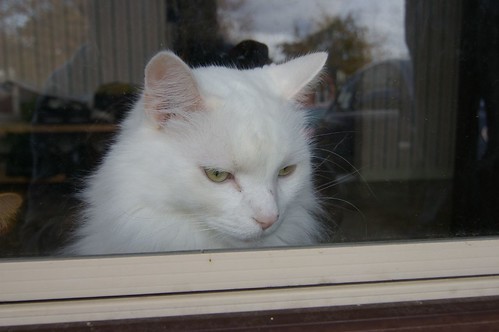 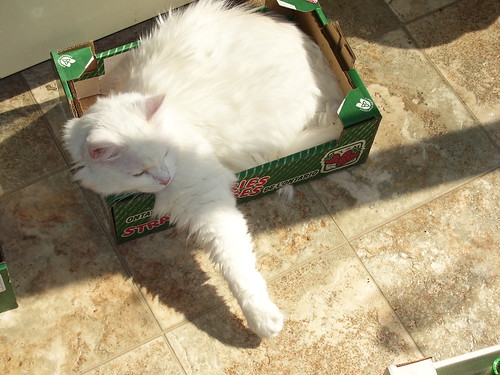 Next in line is Miles. One of my partner's friends found him (and his sisters) abandoned by his mother when he was just little. I think something horrible happened to the mother because mother cats don't usually just abandon their little ones especially since he was so little that he had to be bottle fed! He is now our biggest cat -- he likes to eat! I'm trying to get him to lose weight but its not working very well. He is really not very bright, but he makes up for it with his sweetness and gentle personality. He purrs louder and longer than any other cat I know. 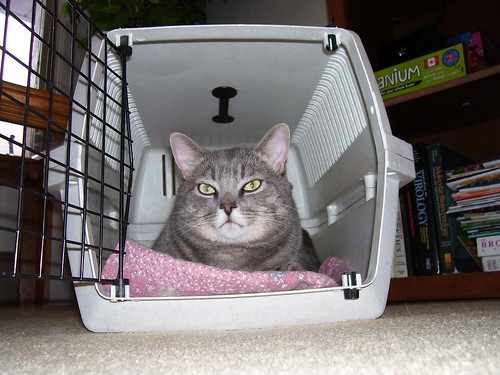 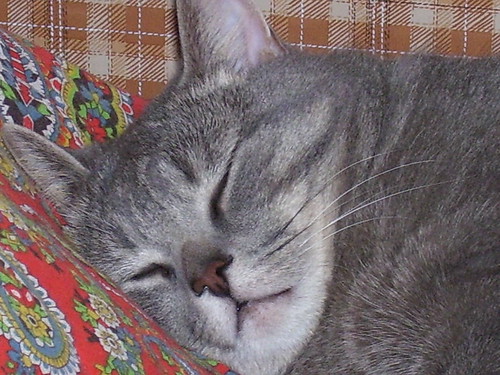 Mila is our little princess -- our only female cat. She is a very proper cat who demands everything with great authority. She is also too intelligent for her own good - if she had opposable thumbs she could open a door knob. She has tried! She is also our little huntress. We don't have a mouse problem because she'll find and kill anything -- and then bring them to me as a present. She was my first cat and grew up in a cat free home (just her). So she tolerates her brothers but doesn't really like them very much. She is also our suckiest cat and demands cuddles and leg rubs (and treats!). If you don't give her attention she yells at you. She has her nasty bitchy meow down! 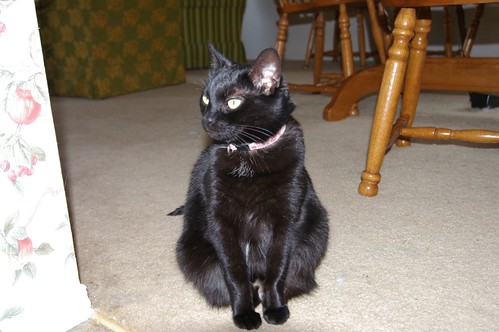 (that is all of Mila, I have lots of photos but she doesn't photograph well because she is all black and her fur glistens oddly. I only want to put nice photos up! Another to come soon!)

Shazaam is our orange terror and poopie bum. He causes problems! He doesn't clean himself very well -- enough said! He is the only cat who tolerates a lead so in the spring and summer he helps me garden. He is also our friendliest cat with strangers. If you come to our house you MUST cuddle him or else he will climb your leg and meow until you give him a pat. He drives us insane but then goes to sleep and looks so cute that we forgive all his trouble-some ways. Damn him and his being so cute! 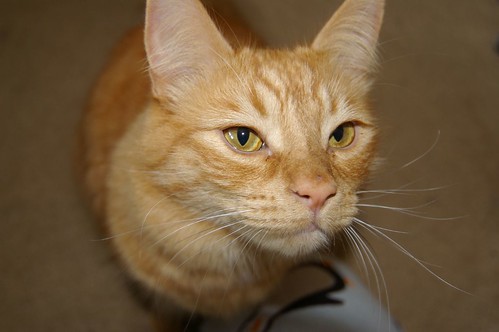 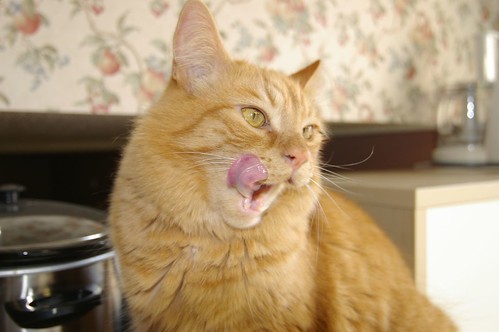 Last but not least is Shinobi, our little wiener. He was born sometime in March 2007 and was rescued from the Cambridge humane society. I really, really wanted a kitten as my other cats came to me when they were older. Perhaps I was selfish in this regard, but I just wanted to experience kitten hood! He really loves his big brothers and sleeps snuggled beside them all the time. He talks SO very much, unless he is sleeping he runs about the house yelling MEW! MEW! MAROOO! Its quite funny; he's such a wiener. He was an extremely good addition to our little family. And our last. We can't handle or afford more than 5 cats, even though I really would love to rescue more cats. I feel so sad when I go into PetsMart and see the older cats up for adoption. Anyway, the first photo is Obi when he is 9 weeks old, and the second photo is him today. He's still technically a kitten, I'm hoping he gets at least a little bigger. He is a very petite cat. 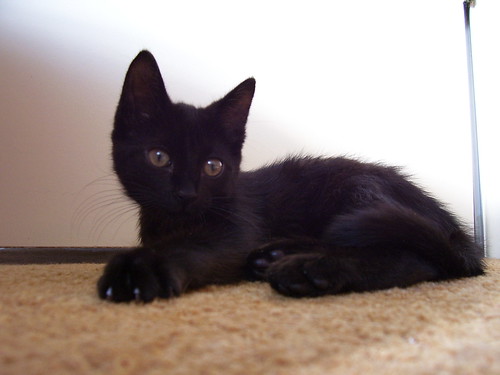 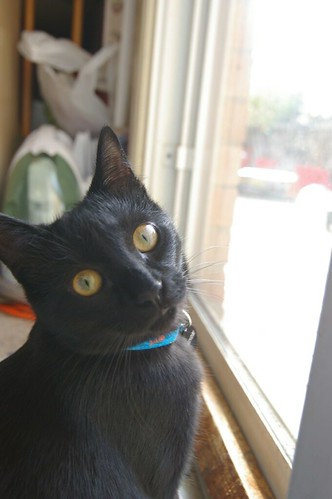 -----GARDENING------
I am an avid gardener. Its winter at the moment so its a little depressing. I love to grow my own everything, organically of course. The photo is of my seedlings from May 2007 -- just before the last frost! 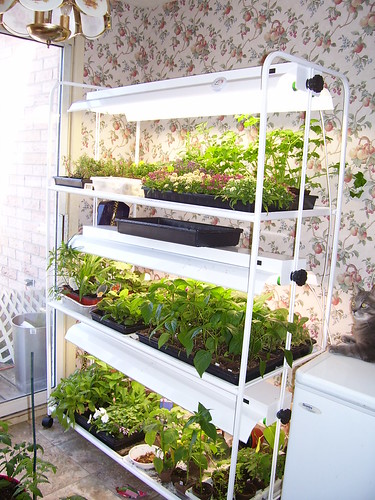 AND if you do know me in real life and just come to this page but don't actually have a LJ account please let me know. I don't like stalkers. Makes me want to make my journal entries 10% friends only and NOT add you to my friend's list. Really. Very creepy.